Last Saturday was our second Jumamosi Poa (Cool Saturday) event. As with the week prior, we had our math, ABC and Geography Room activities, as well as museum guides. This week we included as a guide Mr. Dominic Chonde who is fluent in stories about the Makua people. He mesmerized many with his knowledge (Did you know that watermelons are indigenous to Africa? In his village they would use the water from the melon to cook rice!) 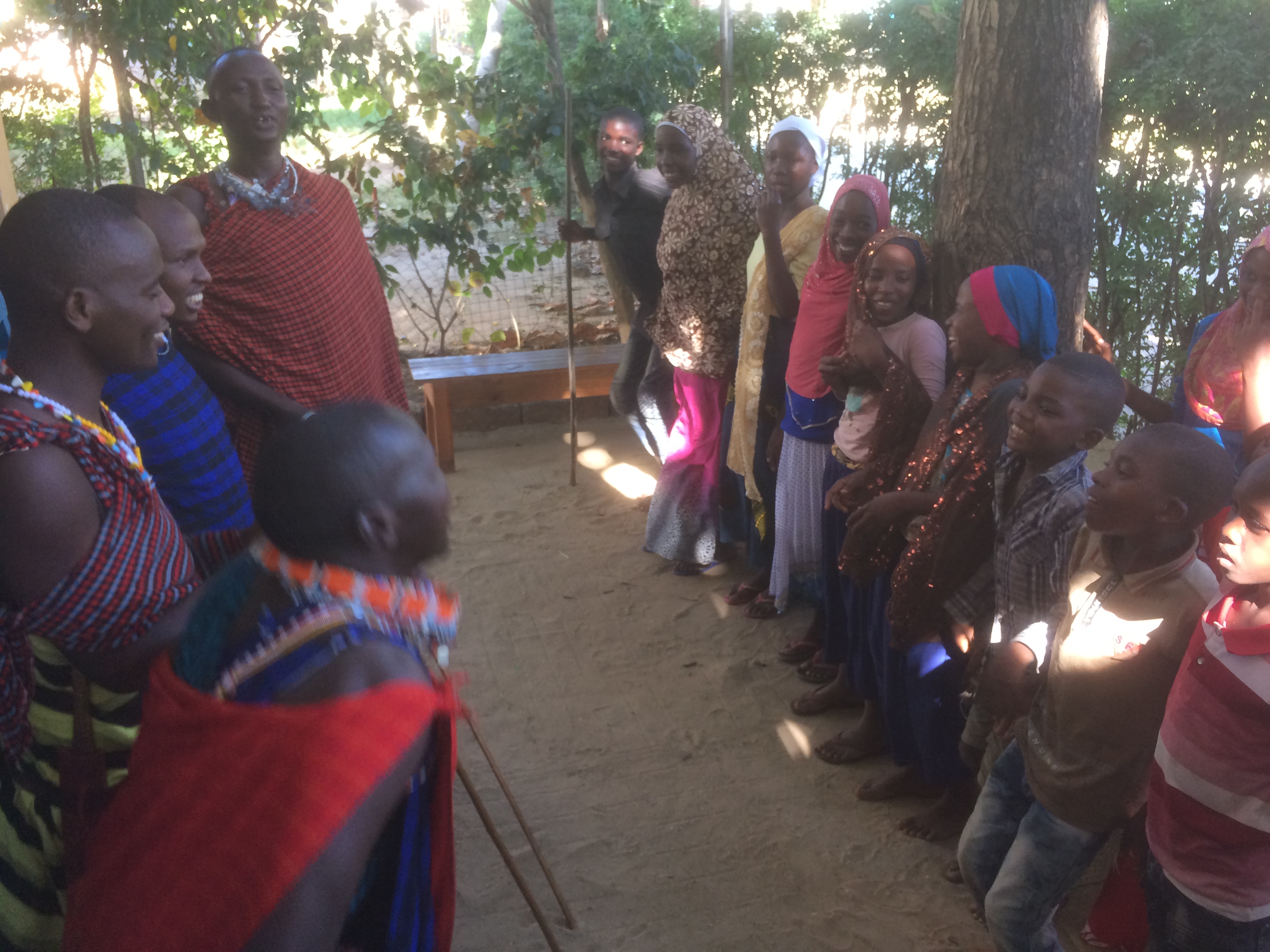 This week’s special feature was men from the Maasai tribe. I had invited Benedict Kitaika, the school director of the Esukuta Primary School that ADEA (my NGO) helped establish in Kajado, Kenya, to take long road from Kenya to Mtwara, Tanzania. Jumamosi Poa seemed the perfect opportunity to profit from his visit.  The Maasai inhabit the savannahs north and south of the Tanzania-Kenya border; from the Serengeti in the west to the foothills of Mt. Kilimanjaro in the east. Due to a variety of life challenges (personal, economic or political) an increasing number of Maasai are making their way to southern Tanzania – all the way to Mtwara. I invited three Maasai (Mohani, Oloyolo, and Olchokut) to join Benedict on Saturday morning. I met these Maasai outside the CRDB bank selling natural medicinal herbs in shade of a giant tree. I invited them to join us to share with visitors about their culture, to do a bit of beadwork with the kids, and sing and jump for them in their uniquely Maasai way. 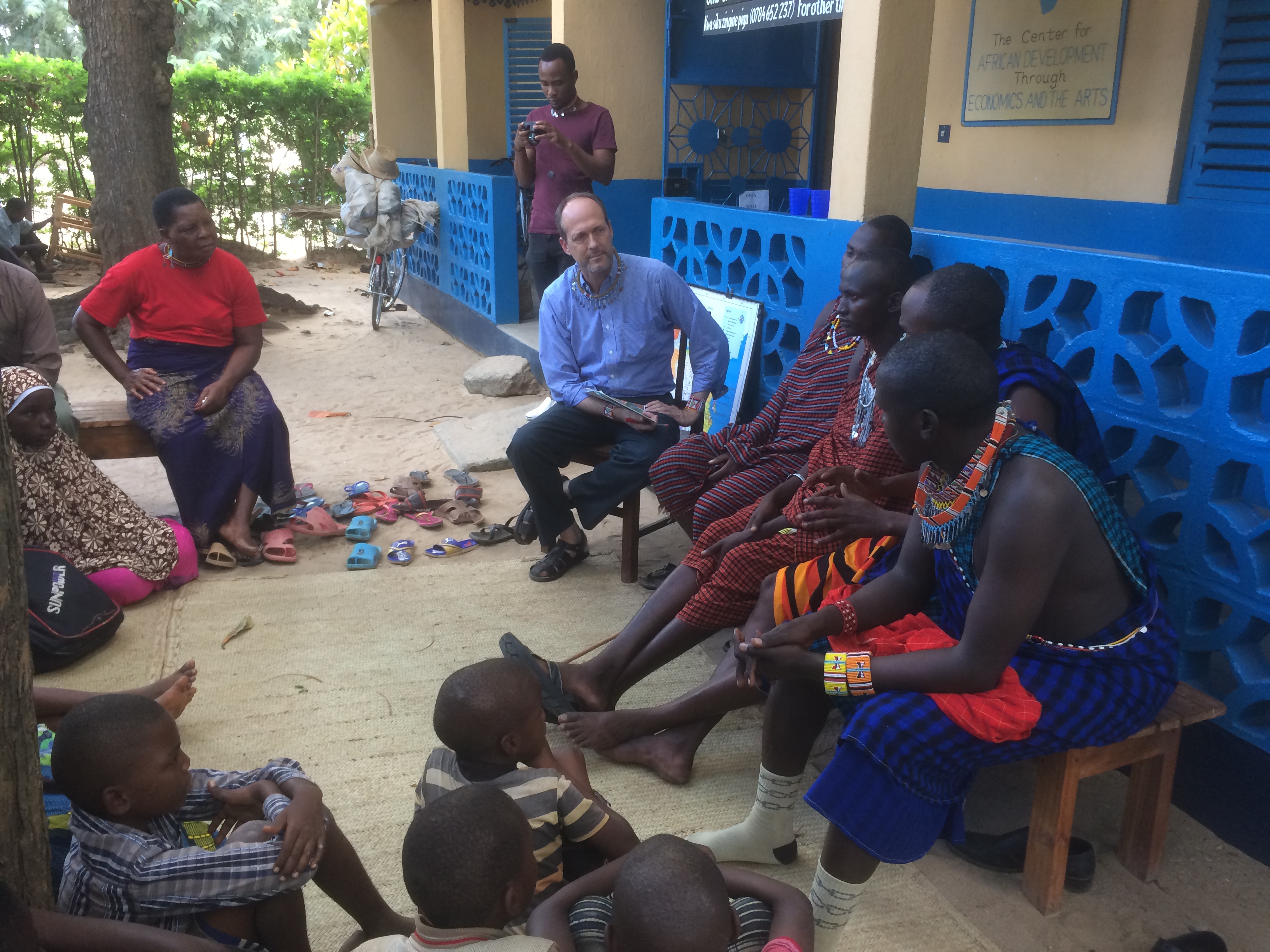 These men had been known in Mtwara as not being local because of the colorful shukas (or sheets) that they wear and the way they speak Swahili with an unfamiliar accent. But Saturday morning our visitors discovered how richly different these men’s Maasai culture really is. Where to begin? The first big “wow” moment came when they shared that their traditional diet consisted entirely of milk, meat, and blood from cows, goats, and sheep. As they believe God created cattle for them exclusively, they believe(d) that to hunt and eat a wild animal, or to cultivate the earth and eat harvested fruits and vegetables would be dishonoring to God. The men and boys can be away from their homes for weeks or even months at a time caring for their cattle. During this time their diet is merely milk and blood. The blood is drawn from the cow’s neck artery. It is pierced with a short “arrow” and the blood is collected in a gourd. At home it is the men who prepare the food (meat) and the women and children milk the cows. Women’s duties are relatively few – care for the kids, milk the cows, and build the houses (manyatas) when the family moves following the herds to grassier pastures. This lack of duties allows the women free time to make the exquisite and colorful beadwork for which they are famed. They make pieces for their husbands, their children, and themselves. Several design are specific for men and for women. Different Maasai communities favor different colors. The Maasai of Arusha, Tanzania use primarily white beads, while those of Rombo, Kenya (where we have our school) favor a mixture of colors. 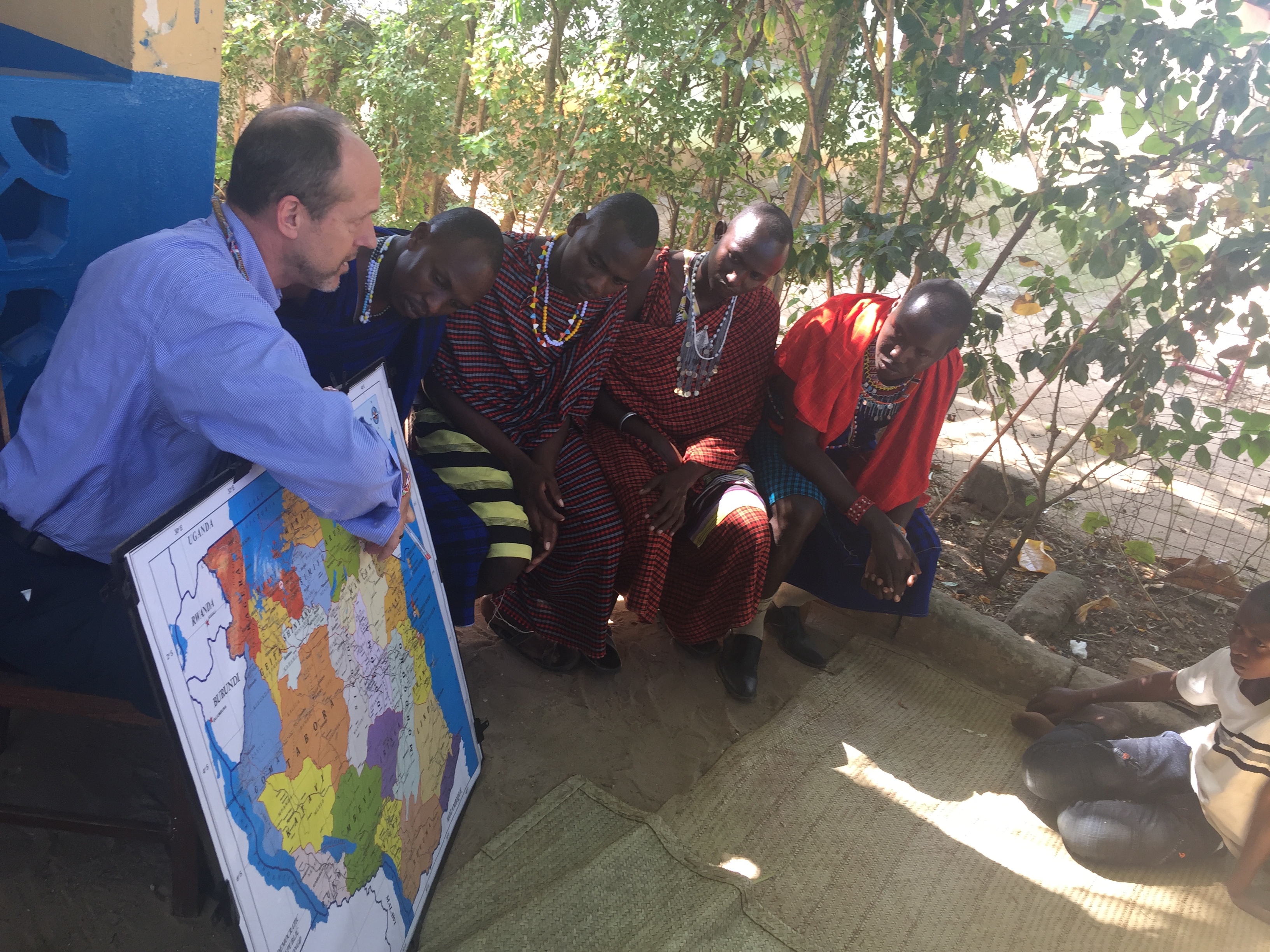 It is the job of the Moran (the warrior age group) and boys to protect the animals. Benedict shared of when, at age 16, he killed a hyena that had caught a goat in its mouth. When they have a goat in their mouths, the hyenas hesitate to run. Benedict used his spear repeatedly until he reached the hyena’s heart. Olchokut had killed a cheetah that was stealing from his herd. Because its speed, it was difficult to kill the cat by throwing his spear, so he dug a pit in which he tied a young goat. Then he hid. When the cheetah leaped into the pit, Olchokut was able to spear the goat killer.   Mohani impressed the visitors the most with his account of killing a lion.   He threw the spear that first entered the lion. This means that despite the help of other warriors, he received the honors. In celebration he carried the tail of the lion on the end of his spear, and wore the mane over his shoulders. These moran are welcomed into the villages. Mohani was given a new name. His now father-in-law wanted to be associated with this warrior, so he offered his daughter to him and she became his first wife.

Interesting fact learned: A lion will not kill a woman or child. In fact Benedict shared the story of when a lion protected his brother who was lost in the bush for over two weeks. During the day the lion would sit at a distance from the boy; in the night it would move closer, chasing away any animals threaten him.

Polygamy is common among the Maasai (though less so these days). Mohani’s father’s had twelve wives. Maasai families don’t live all together in one big house. Each wife has her own small manyata (hut) for her and her children. The husband has his own manyata. When a boy comes of age (puberty) he will move into his father’s manyata unit he becomes a moran warrior, at which time he will share a hut with other moran. While a moran he must always be in the company of another moran when eating. To have multiple wives a man must have a considerable number of cows. This Maasai’s whose father had twelve wives had over 1500 cows (though the exact number of cows is not known because it is bad luck for a Maasai to count his cows). For the Maasai cows are their greatest treasure. They know and understand them freakishly well knowing if one in missing (without counting), detecting even the slightest sickness, and recognizing the sound of its “moo” miles away. A Maasai’s fame is often based on the size of his herd. 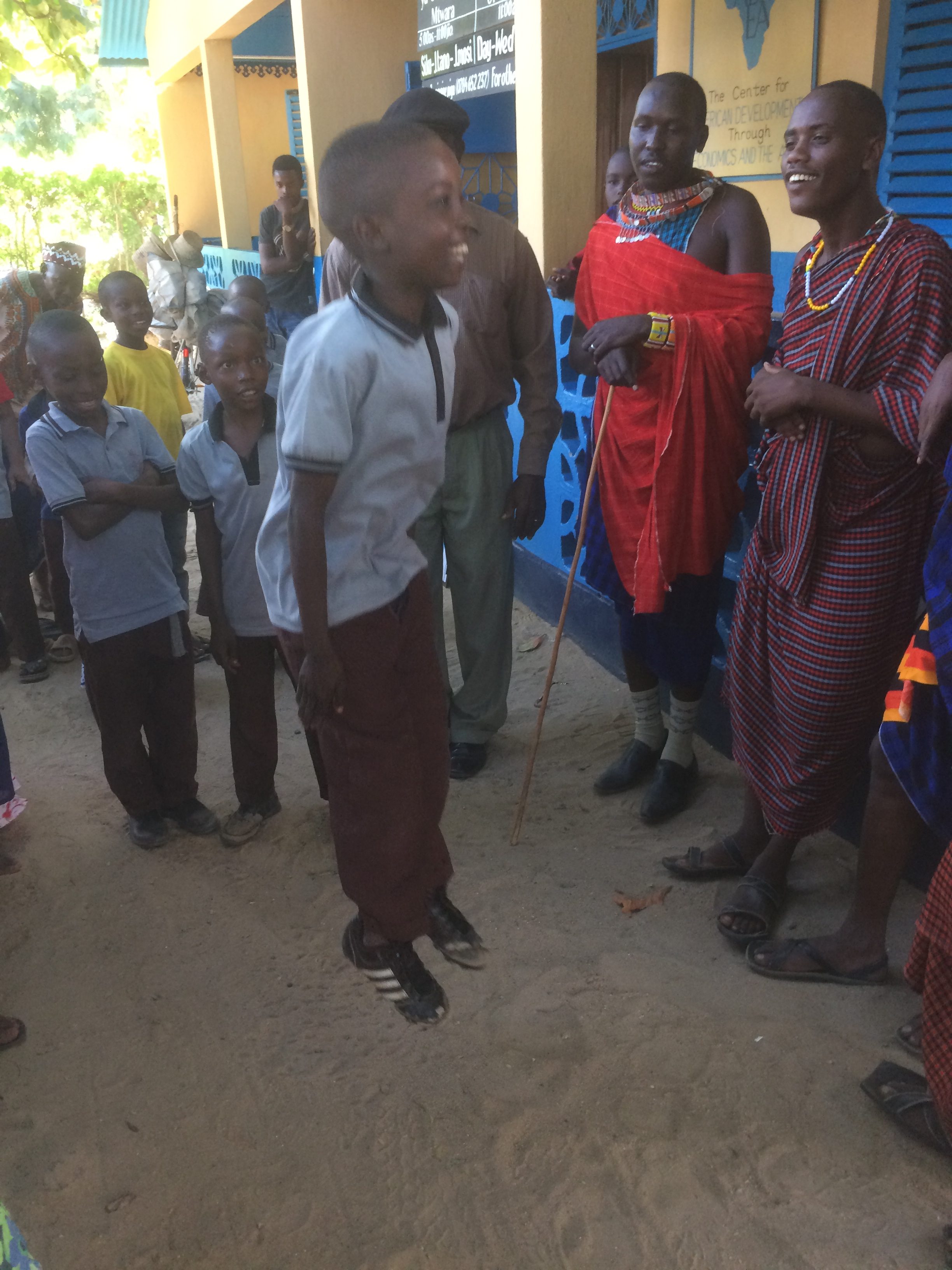 There are many more interesting things we learned about the Maasai culture, but after wonderful interviews it was time to sing, wobble and jump (yes, jump not dance).   The Maasai men sing and jump without percussion instruments. They use just their voices. Each man takes on a different part – a bit like a beat box. I’ve included a video because my description wouldn’t do it justice. [for video please visit: https://web.facebook.com/douglas.a.mcfalls/posts/10155975270216504] While they sing they jump, ending with a slap on the ground with their feet. They wear sandals made of car tires – why? – because they are long-lasting, waterproof and stronger than the thorns that litter the ground.   The kids and a few self-confident adults joined in the jumping, wobbling, and singing.

Speaking with the team the following Monday it was wonderful to hear how they had replaced their suspicions and fear of the Maasai with a deep respect and interest. We will be asking the kids next week how their perceptions have changed.

We ended the day with some simple beadwork lead by Benedict for our hands-on experience.

It was another successful Jumamosi Poa – Cool Saturday!

Next week we will feature basket and mat weavers!

COULD YOU GIVE A LITTLE SUPPORT? Having a structured and impactful programming is not free. In fact money is needed for the special guests, additional staff and activity supplies. This first “Cool Saturday” cost roughly $45 USD. Sure, ADEA has larger financial needs, but please consider even a small contribution to keep “Cool Saturdays” growing. You can do it on the home page of this site. It’s tax deductible 🙂 – Thanks and be blessed – Douglas 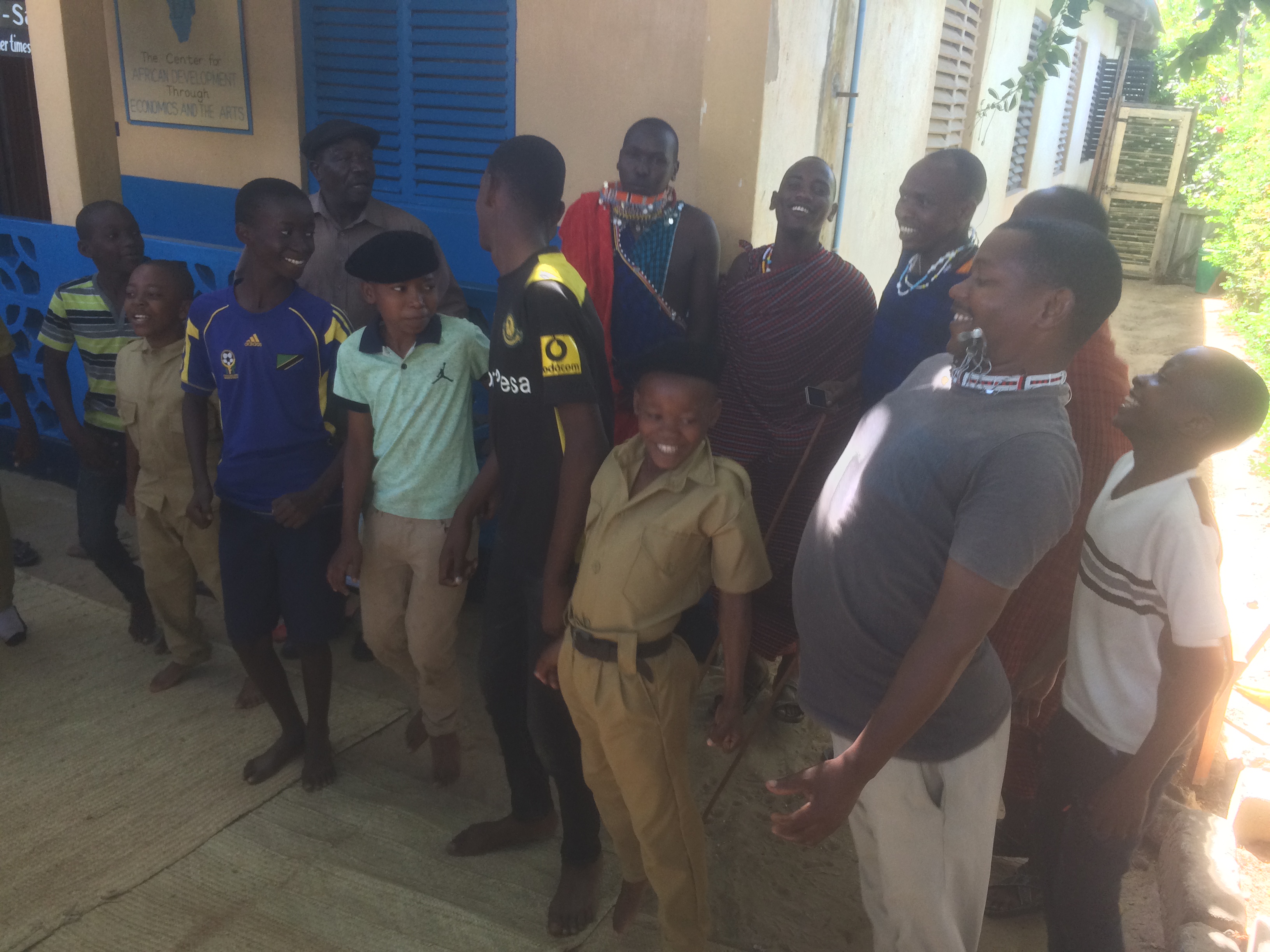 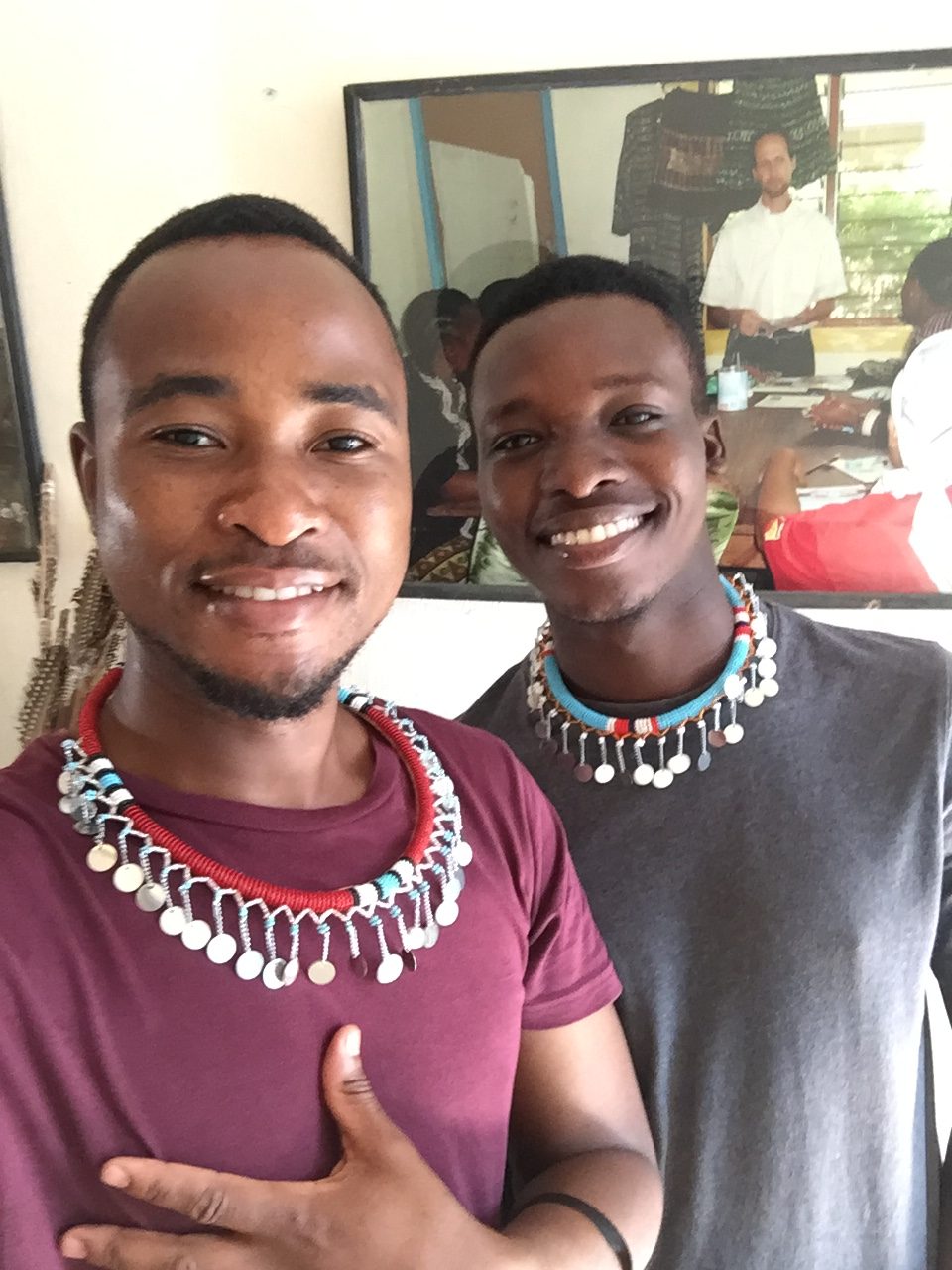